This year, Brussels will pay tribute to Pieter Bruegel the Elder on the 450th anniversary of his death. The event is in line with the three cultural years dedicated to Flemish masters, in 2018-2020. One of the most awaited moments will be the return of the famous painting Dulle Griet to the Mayer van den Bergh House-Museum in Antwerp after the important restoration that restored it to its original splendor. Between 1400 and 1650, the corner of Western Europe known today as Flanders was a crucible of culture. The pocket of land framed by Bruges, Antwerp, Brussels, and Leuven had become wealthy through trade and the renowned skills of its weavers, a wealth reflected today in the splendor of its architecture and the astonishing artworks within its churches and museums.

Father of a dynasty of painters, Brueghel is loved around the world. But so far, attempts to organize exhibitions on his production have failed, mainly because of the fragility and value of his works.

The exhibition, which celebrates the 450th anniversary of the death of the artist, includes loans from leading European museums. Some of the paintings have been expressly restored for the exhibition. About 30 paintings and 60 drawings will be exhibited. Two paintings of the “Tower of Babel”, respectively from the Boijmans Van Beuningen Museum in Rotterdam and from the Kunsthistorisches Museum collection, are gathered for the first time. Among the other masterpieces is “Adoration of the Magi under the Snow” (1563) by Am Römerholz of Winterthur and two works restored for the occasion: “Margherita la pazza” (circa 1562) of the Mayer van den Bergh museum in Antwerp and “The triumph of death” (1562-153) of the Prado de Madrid.

Little is known about Brueghel’s life other than a few bare facts: he was born in Antwerp between 1525 and 1530 and probably learned to paint in the studio of Pieter Coecke van Aelst, who later married his daughter and died in Brussels in 1569. We know that he travelled through Italy before the birth of his sons Pieter and Jan, who were respectively born in 1564 and 1568. Although famous in the seventeenth century, Brueghel fell into relative obscurity before being rediscovered in the late nineteenth century, but some of his oeuvre did not survive; the fabric works, for example, were too delicate.

Thanks to the enthusiasm of Habsburg collectors in the 17th century, the Kunsthistorisches Museum now has the largest collection of paintings by the artist. The six years of research that preceded the exhibition were fundamental to obtaining loans. There is indeed a lot of literature on Bruegel, but not on his methods of work. 2019 will be the occasion to shine a new light on this most influential of painters. 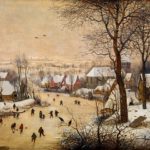