When someone takes your photograph, do you instinctively adopt the flattering three-quarter view, where one side of your face is fully visible and the other partially so? If you do, you have the Flemish painter Jan van Eyck to thank for popularising such a stance. In the 15th century, it was he who first broke away from the tradition of facing the camera head or side-on. If you wish to see some of these early portraits, then you’re in luck. In 2020, the largest collection of Van Eyck work ever staged is coming to Ghent and it’s super easy to reach if you’re staying in Bruges in one of charming guesthouses.

The exhibition is entitled “Van Eyck. An Optical Revolution.” Hosted by the Museum of Fine Arts (MSK) Ghent, numerous valuable works go on display, including “Portrait of a Man (Léal Souvenir)” and the eight restored exterior panels of “The Adoration of the Mystic Lamb” (commonly known as The Ghent Altarpiece), which haven’t left the city’s cathedral since 1902. They accompany work from Van Eyck’s studio together with more than a hundred works dating from the period of the late Middle Ages. In all, the exhibition will occupy thirteen of the museum’s rooms. If you’re an art fan, you’re not going to want to miss this.

What’s so special about Van Eyck?

In his day, Van Eyck revolutionized the art world. He is credited with being an early adopter of verism, a term used in the art world to describe work that’s a warts and all representation of what the artist saw before him. If you like, it’s a similar concept to publishing a photo that’s not been airbrushed or Photoshopped. The use of light was crucial to this sense of realism, adding depth to a picture with the use of highlights and shadows. In landscapes, such a technique manifests itself rather more beautifully in panoramic landscapes that recede into the distance.

Such use of perspective to add an extra dimension to painting was a new thing at the time. Leonardo da Vinci wouldn’t produce such landscapes for another 50 years. Look closely at Van Eyck’s “Saint Francis of Assisi Receiving the Stigmata”, one of his most famous works. Not only does it show a mountainous background, but it also places a miniature city in the distance. Some say that points to the artist having an early career as a miniaturist and that there’s a good chance he might have been the anonymous “Hand G” of the Turin-Milan hours, a 14th century illuminated manuscript.

One of Van Eyck’s most famous paintings is unfortunately considered to be too fragile to travel and will remain at the National Gallery in London during the period of the exhibition. It is thought to be a self-portrait, another innovation at the time and the means by which an artist could showcase his skill and style. The subject of the “Portrait of a Man in a Red Turban”, painted in 1433, gazes intently at the viewer, leading some to back the theory that this isn’t just a portrait, but it is Van Eyck himself, the inventor of the selfie.

An easy day trip from Bruges

If you’re planning to visit Ghent to see the Van Eyck exhibition, it’s an easy journey from Bruges, where the great painter lived from 1429 until his death in 1441. Unfortunately, the building where he lived and worked was destroyed in a fire in the 20th century, but that’s all the more reason to travel to Ghent if you have an interest in the artist.

The easiest way to get there is by train. The fastest journey time from Bruges to Gent Sint Pieters station is just 22 minutes; from there, the museum is only a fifteen-minute walk. If it’s raining, hop on a #70 bus and in just a few minutes you’ll be at the museum. If you’re driving, the journey time averages a little over half an hour. Parking is limited at the museum but there’s plenty nearby in the underground car park at St Peter’s Square, about a five minute walk away. Note that in 2020 Ghent introduces a low-emission zone. Register your vehicle in advance via www.lez2020.gent.

The large exhibition ‘Van Eyck. An optical revolution ‘begins on 1 February at the MSK Ghent. Of the 20 remaining original paintings of the Flemish primitive, ten are shown. The Lamb of God is divided into two. The restored exterior panels are displayed at the exhibition. The now restored sub-register can be seen again in the Sint-Baafs cathedral from January 24.

You can find the full programme here:  Winter in Ghent 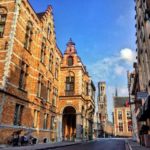 Guestrooms for your conference or seminar in Bruges
error: Content is protected !!
×